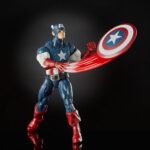 From the dark days of World War to the explosive challenges of today, super-soldier Captain America stands ready as a shining Sentinel of Liberty to shield the oppressed and fight for freedom everywhere.